Many of our readers know Oscar De La Hoya as “The Golden Boy” for being one of the greatest pound-for-pound fighters in boxing history.  He won Olympic Gold at the 1992 Summer Olympics, and was propelled to even greater heights as a professional boxing champion, a successful entrepreneur with Golden Boy Enterprises, and a philanthropist in the decades that followed.

Holly Sonders started her career in the public eye as a professional golfer, and then became an analyst for the Golf Channel and Fox Sports Live.   A modeling career followed.  Holly uses her social media platforms to entertain her audience in a manner that’s sexy, edgy and fun-loving.

As a couple, Oscar and Holly are as genuine as can be while living in the public eye.  We were happy to catch up with them in Los Angeles for a memorable photo shoot, and a breezy conversation that capped the day.  They are, indeed, The Golden Couple. 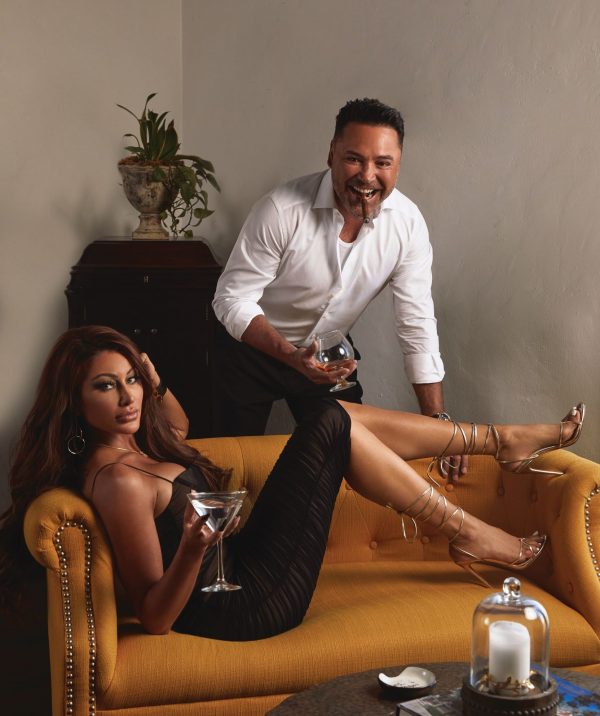 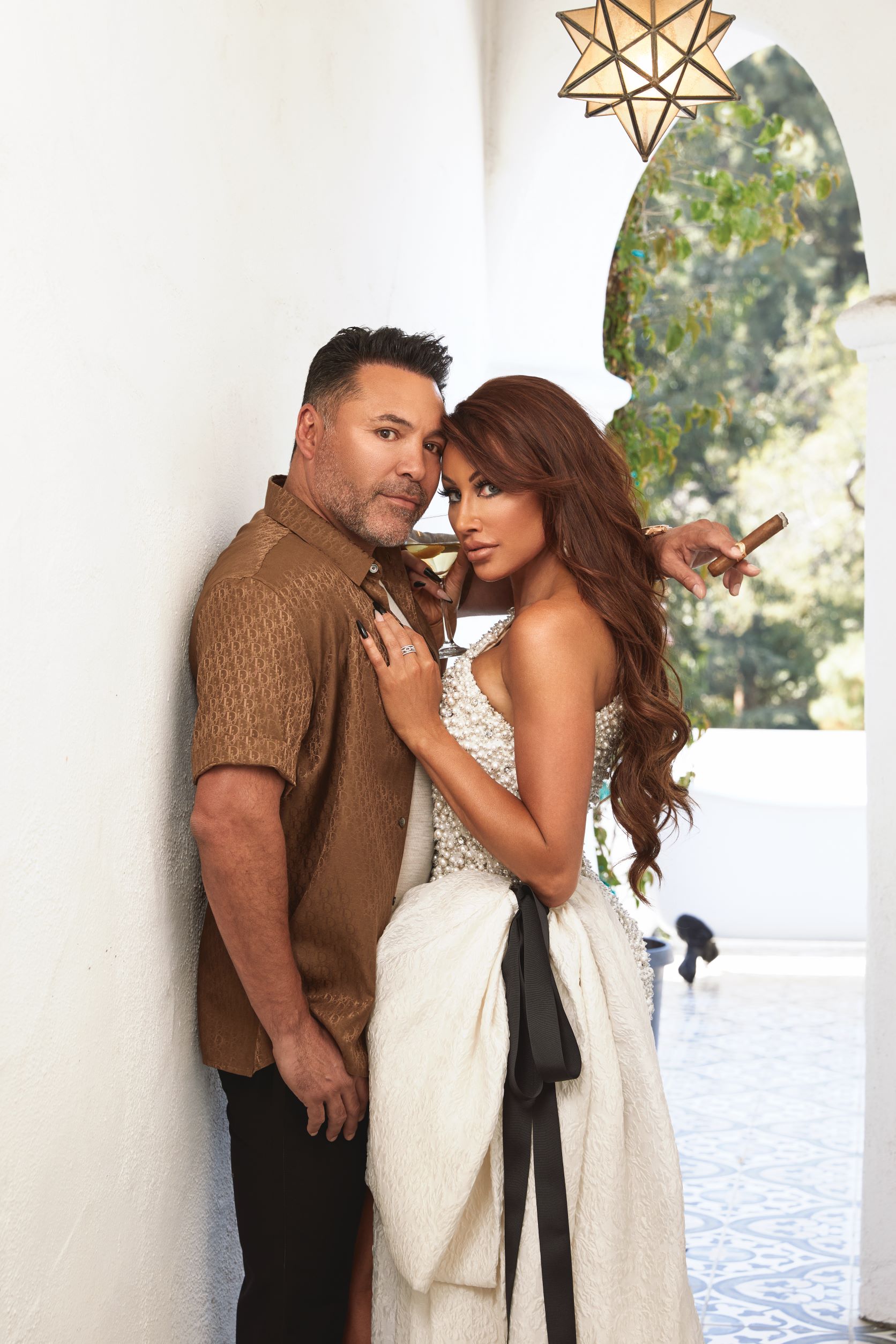 Cigar & Spirits: Did you guys have a good time doing the photo shoot?

Oscar De La Hoya: We had a great time.

By the way, that was one of the hottest shoots we’ve ever done for the

Holly Sonders: Well, it wasn’t Oscar and Mario this time. I hope they weren’t that hot together. [Oscar De La Hoya and Mario Lopez were the cover stars for the May/June 2018 issue of Cigar & Spirits Magazine.]

The energy and connection you both have is unbelievable. How did you guys meet?

Holly: Oscar started a new boxing show for Bally’s Sports Network. It’s really cool. He needed someone conduct the interviews. “They need someone who’s edgy and good at their craft.” He reached out to me. It took a little convincing because I’d been done with the broadcasting stuff. My agent was like, “You should really do this. It’ll be a great production.” That was it. I saw Oscar and that was it. Truly, it was just amazing.

Oscar: She saw me and she’s been regretting it ever since. [laughter] You know, it’s crazy because we have such great chemistry. Ever since we met, it’s like there’s fireworks left and right. I can’t stop looking at her, and I can’t stop thinking about her. It really was love at first sight.

That definitely shows. It seems like you guys have a good time together.

Holly: This is how we are at home, too.

Oscar: It’s me finally coming out of my shell. I’ve been doing this for 30-plus years. In the limelight, in the ring. When I met Holly, it’s like she finally let me be who I am. It’s like a fresh of breath air.  People don’t know that I’m silly. I love to laugh. I love being serious when I do business, but when I’m with her, it’s like I can basically just be me.

Oscar: It’s going to be a lot of fun. We’re shooting it in Las Vegas.  Because you’re building a home there?

Oscar: The reality show is basically going to show you our real lifestyle. People might think our lives are over the top and glamorous. That’s just not us. It’s a lot of fun. You get a lot of laughs, that’s for sure.

Do you ever have any kind of drama or a dilemma in an episode?

Holly: There’s a lot of work-related stuff. They’ll show Oscar at the office. That’ll be some of the more serious points. Dilemma? We all have some kind of drama in our lives.

Holly:  I mean there are some things. When you’re dealing with somebody who’s beloved and famous, there are always challenges that come with it. He’s still running a major corporation. I would say a lot of the drama in the show could possibly come from that.  Also, you never know what can come up he has six children, and so there’s the family aspect. [laughs]

Holly: Right. All different ages. A lot of exes on his end. I’m 15 years younger than Oscar, so there’s an age gap.

Oscar: We sometimes have a little drama with that because she can’t keep up with me. [laughs]

Holly: I’ve lived in Vegas for a couple years. I kind of twisted his arm a bit. I miss Vegas. It’s a party place. But the show will capture the essence of suburbia, and building our own home. The house is actually like a tribute to him.

Oscar: Thank you. It’s going to be pretty cool.

Holly: He’s the most humble person in the world. I wanted a Golden Boy statue outside. He said no. I’m shocked. [laughs]

Holly: His title belts will be displayed there. We want to actually have seats from the MGM—like a little boxing ring in the house. We know our roles very well in the relationship, and we both stay in our lane there. I do know how to handle him. Everybody else told me that he would be very difficult and I’m like…

Holly: He’s the most fun, the kindest and the most thoughtful person. Maybe when he was younger, maybe he was a little tougher to deal with.

Oscar: I think as men, you calm down as you get older. You see what’s more important in life.

You prioritize a little differently as you get older.

Oscar: You understand what’s important in life. What makes you happy.

Holly: What makes you better, too.

Oscar: Yes. And who makes me better. 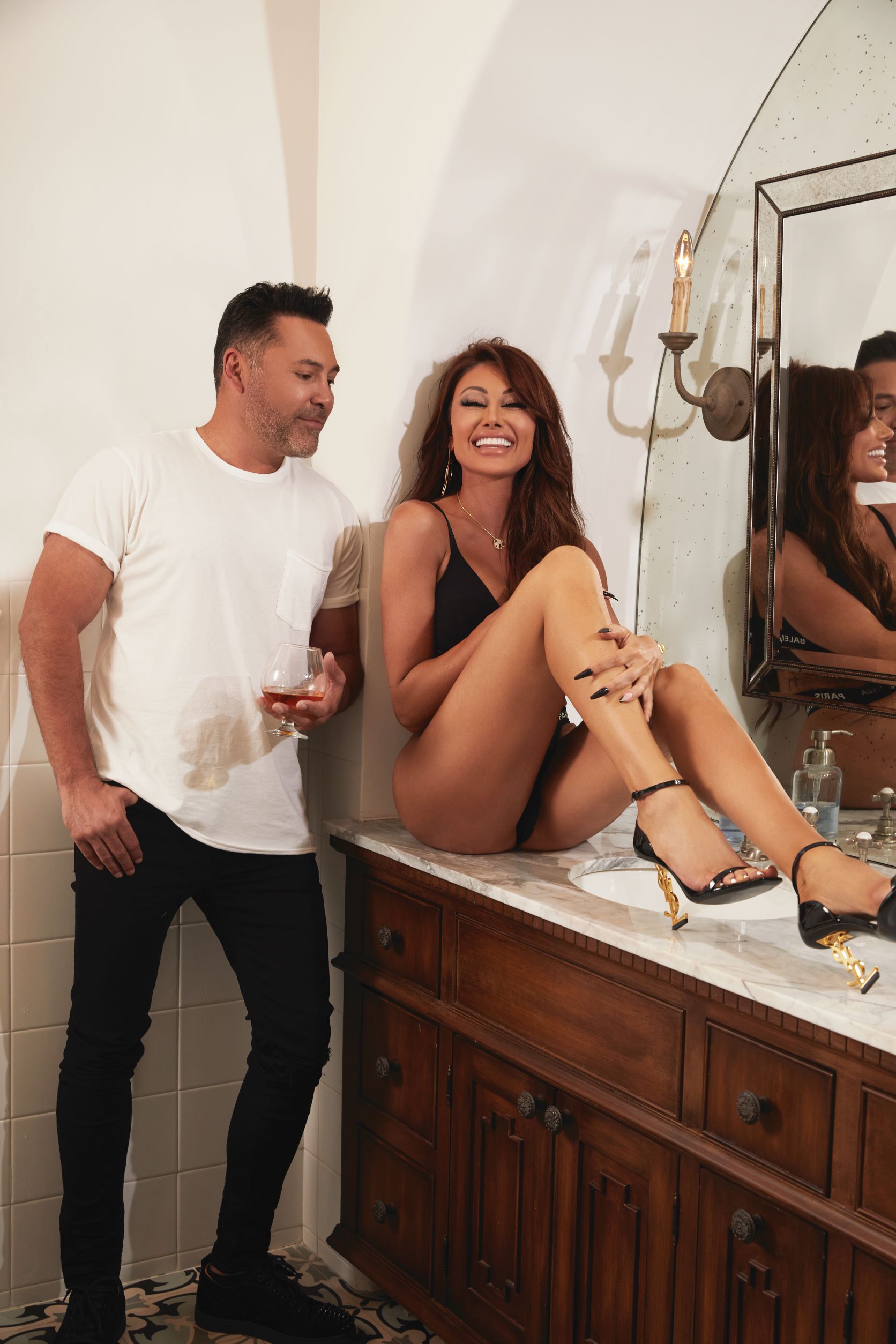 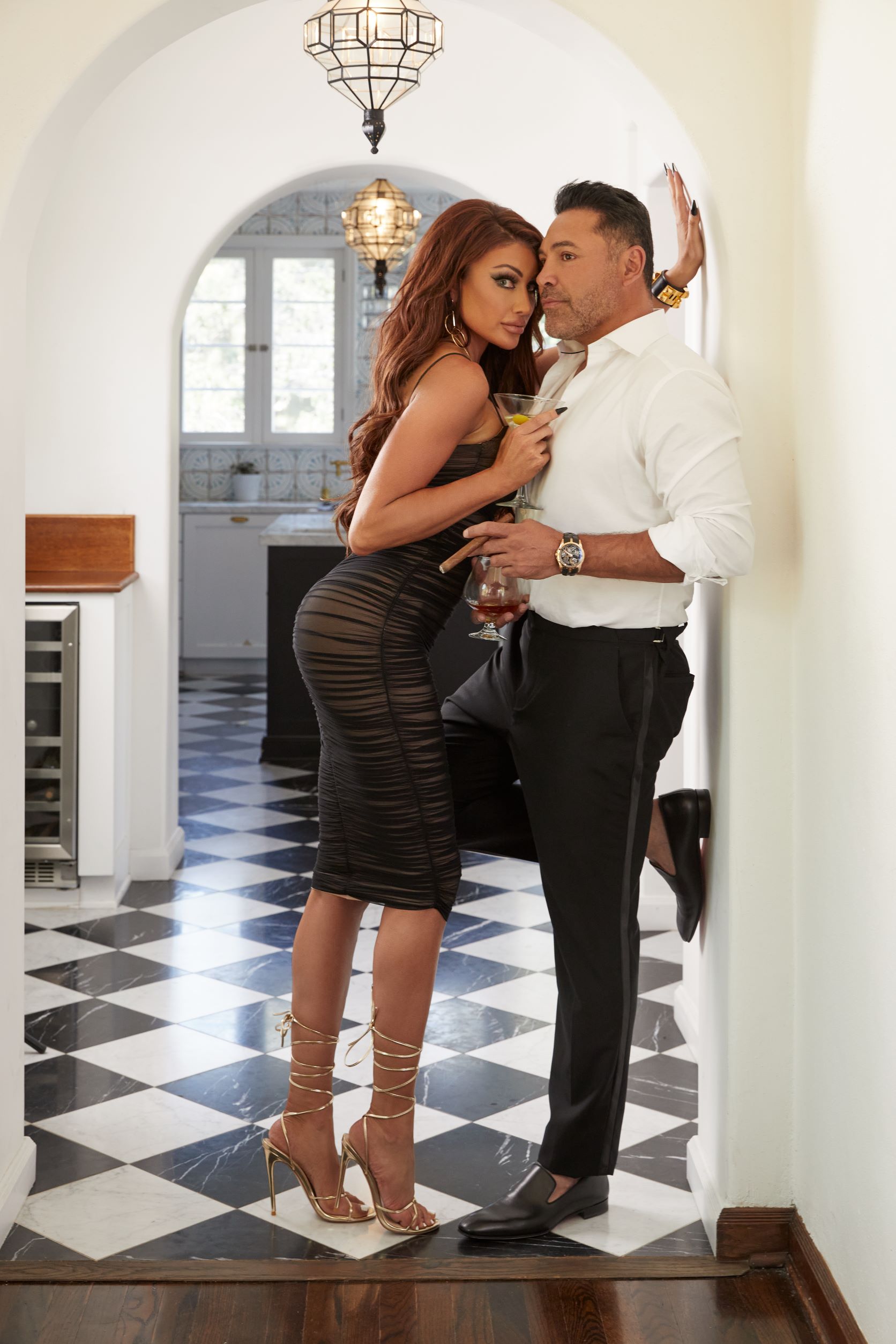 Speaking of men, tell us about Masculen.

Holly: Yes, it launches in July. Masculen is basically going to redefine performance for men, and health for men. There are five different products that are coming out, and they’ll all do something different.  One helps you focus better. One helps you sleep.  There’s one to improve sexual performance.

Holly: There’s one product that I don’t think there’s anything else like it right now. It’s called the Titan. It increases your amount of semen by 167 percent.

Oscar: Well, there you go.

Holly: So that’s another joke at home.

Is Oscar the test?

Holly: We’ll give it to everyone for Christmas. It’s a Christmas gift.

And the reality show?

Oscar: Yes, it’s basically the perfect platform to showcase Masculen as well as the fighters I promote.  I believe I promote over 75 fighters. Some of the top world champions today. It’s just going to be a real look into our lives, and who we really are.

Holly: Yes. I was thinking about that question you asked about drama. Some of the drama comes from the lead-up to showcasing major fight events.

Holly, you got a tattoo of Oscar recently?

Oscar: Yes. It’s me at 18 years old winning the Gold Medal at the 1992 Olympics in Barcelona.

Holly: You were looking up at your mom.

Holly: His brother-in-law Esteban actually did the tattoo. So it’s like a whole family thing.

Oscar: Were you thinking “What can I get him? What gift?”

Holly: Yes, I just wanted to show you that I love you. That’s it.

Holly: You can buy someone a Ferrari. You can do whatever you want, but this tattoo isn’t going away. I just wanted to give Oscar something nobody else could ever give. Oscar can buy anything he wants.

Oscar: That is true. That’s why this means so much.

Holly: I didn’t know how big it was going to be. When Esteban was doing it, I thought it was big and then I was like, “Oh, shit.” [laughter]  Oscar was like, “Bigger! Bigger!”

Oscar: Absolutely, yes. My brother-in-law kept saying, “A little bigger.” The internet was all over it like it was the kiss of death to get a tattoo of your significant other anywhere.

No way. I think it’s fantastic.

Holly: Yes, that’s a whole other part of the drama. There’s always somebody who has an opinion on everything that we do.

All you can do is just live your life and be happy, right?

Holly: That’s it. Live in our bubble, and enjoy the good stuff.

More From This Issue 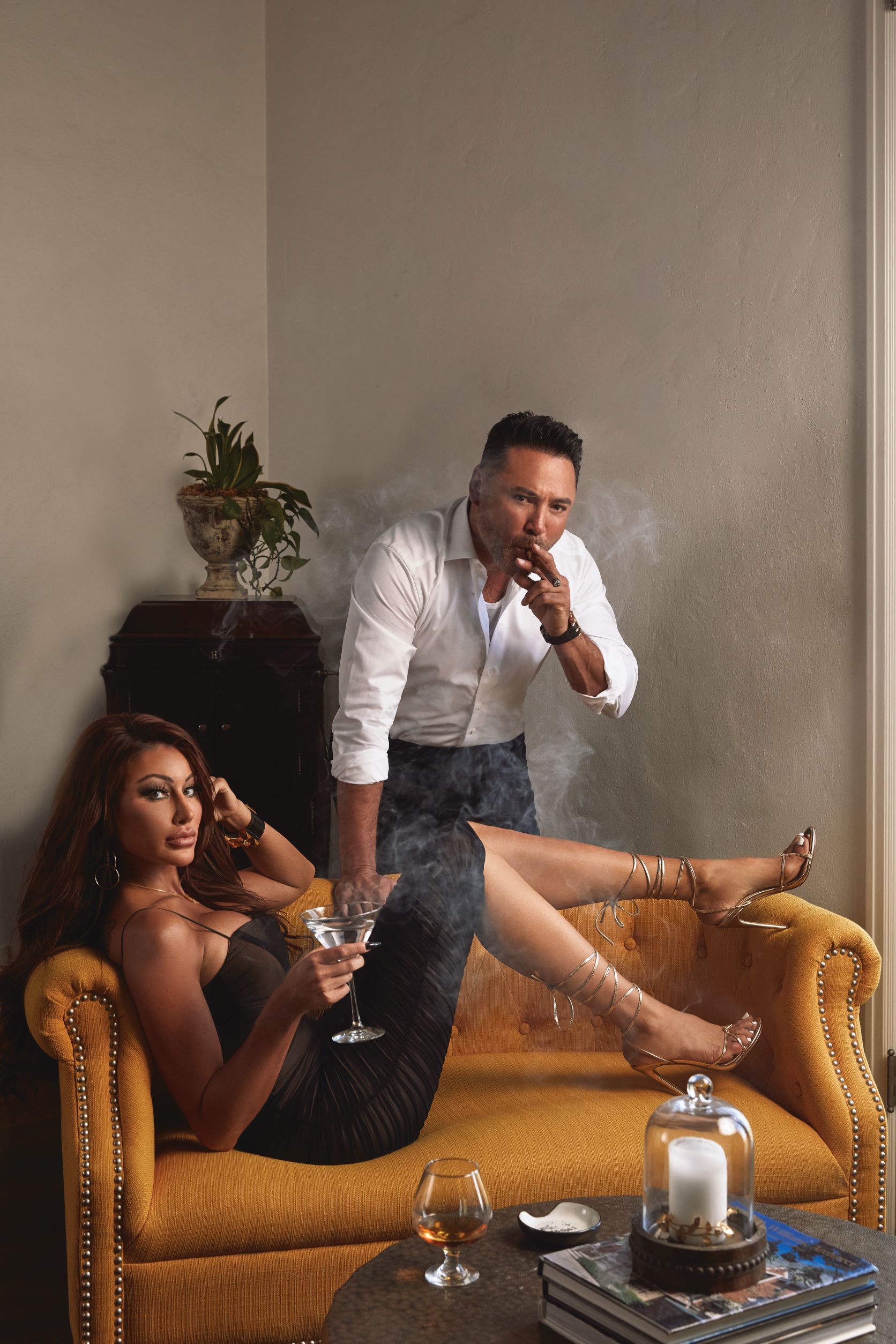