The Artist Behind the Smoke

The Artist Behind the Smoke 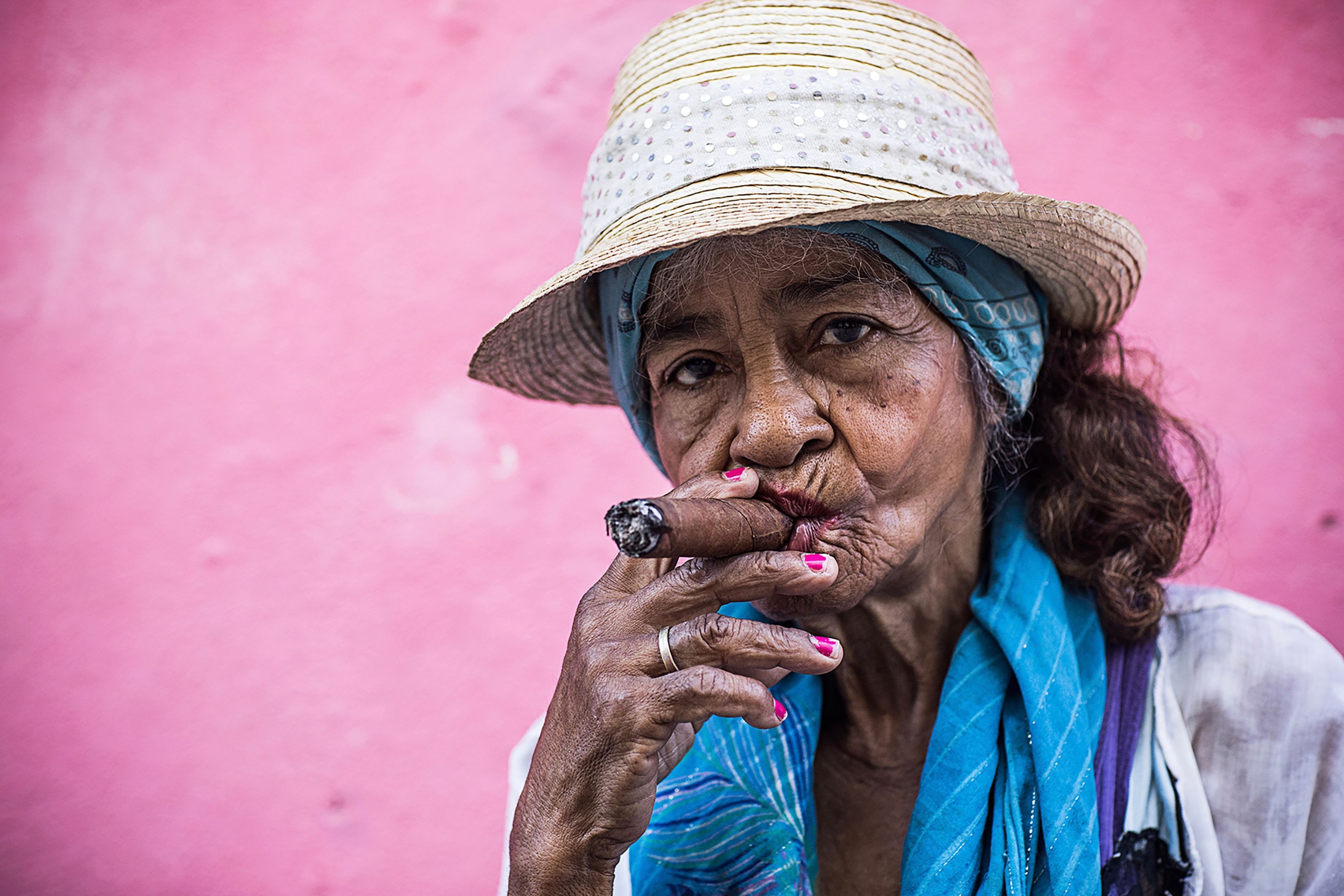 For Réhahn, the world-renowned French photographer, smoking a cigar is about more than just pleasure. It’s a celebration of an ancient craft, an entry point into a conversation with a new friend. Cigars have accompanied Réhahn throughout his career, from being honored for his cultural preservation work to having one of his photographs presented to French President Emmanuel Macron. He’s regularly listed as one of the top 10 portrait photographers in the world, with a body of work that includes some of the mo st recognizable images of contemporary Cuba, Vietnam and India over the last decade. His photographs and cultural museum have been featured in every major media outlet in the world. Yet, despite the accolades, the artist is never more at home than when he’s sipping coffee and puffing away on a Cohiba or Trinidad in the early hours of the morning, before heading out with his camera.

“I don’t smoke cigars for their cult status,” Réhahn says. “To me, they’re a way to interact with people. As Alfred de Musset once said, ‘Any cigar smoker is a friend because I know how he feels.’”

Réhahn’s style bridges the worlds of documentary, literature and fine art. He captures the stories of people and their cultures–stories that remain in the viewer’s mind–demanding to be heard. This passion for culture is what ignited the artist’s love of cigars in the first place.

Drawn to Cuba because he wanted to learn more about the country’s heritage, he found himself wandering the streets of Havana in 2007. Tables tumbled out of cafés, with meals served in the open air. Vintage cars ambled down streets lined with crumbling pastel facades. What could be more photogenic? Yet, Réhahn was interested in seeing the authentic Cuba, not just the charm of the old town. He hired a driver to take him to the countryside. His chauffeur, Edel, was jolly and prone to waxing poetic about everything from cigars and rum to politics and ideologies.

Réhahn smoked his first cigar out of the back of Edel’s car. It was hand-rolled from local tobacco, and strong enough to turn his head. From that moment on, cigars became an essential part of the photographer’s travel kit. 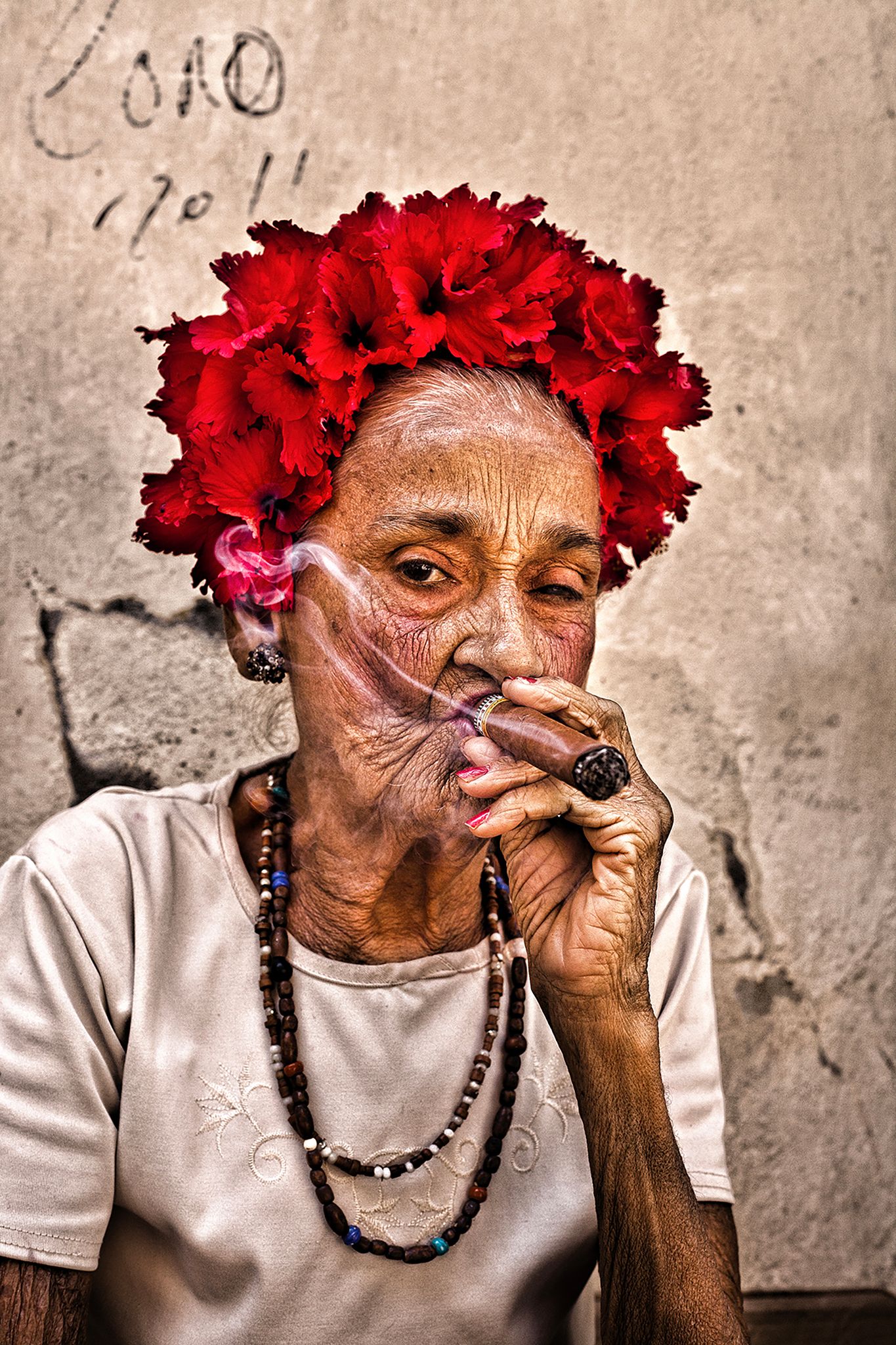 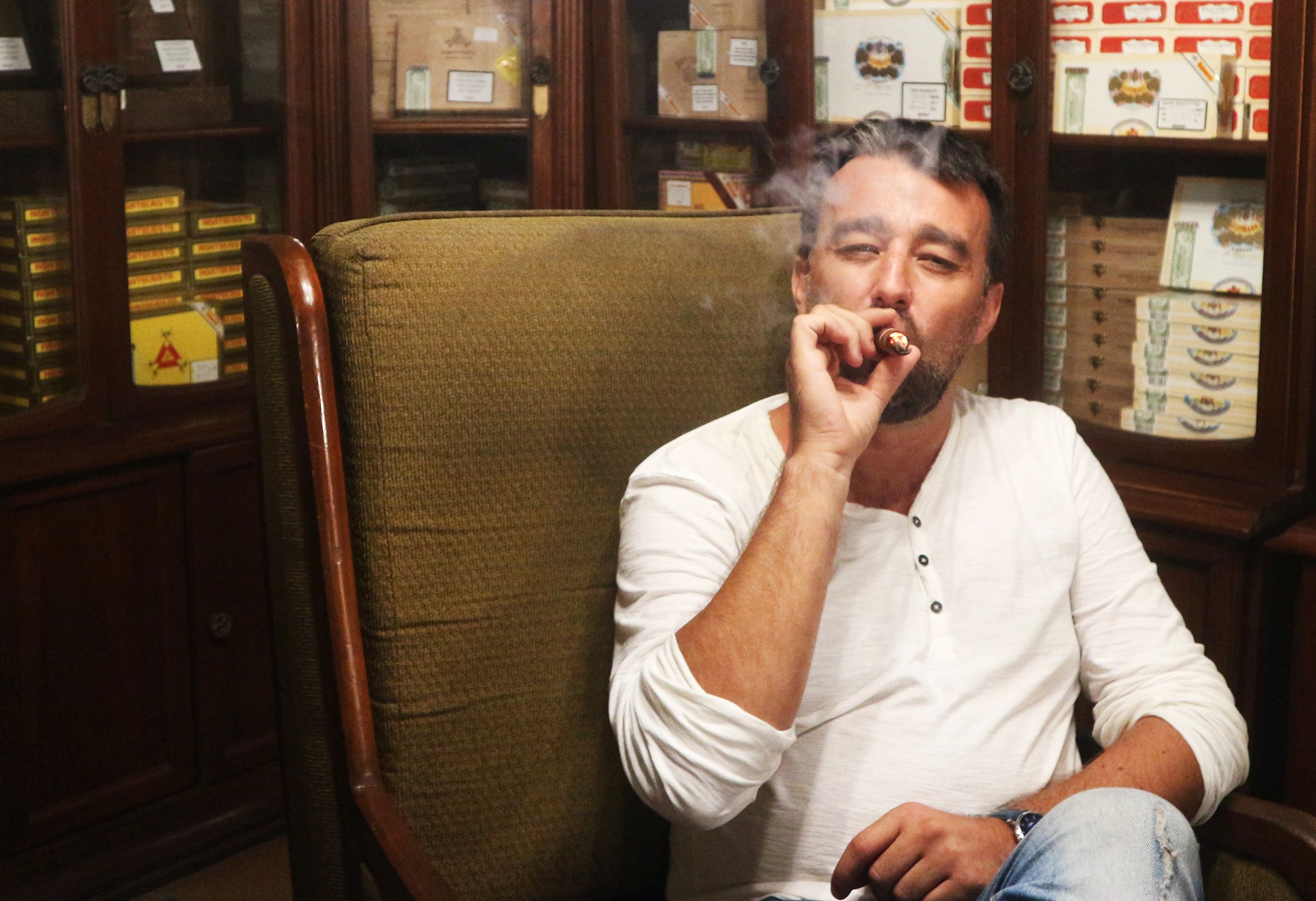 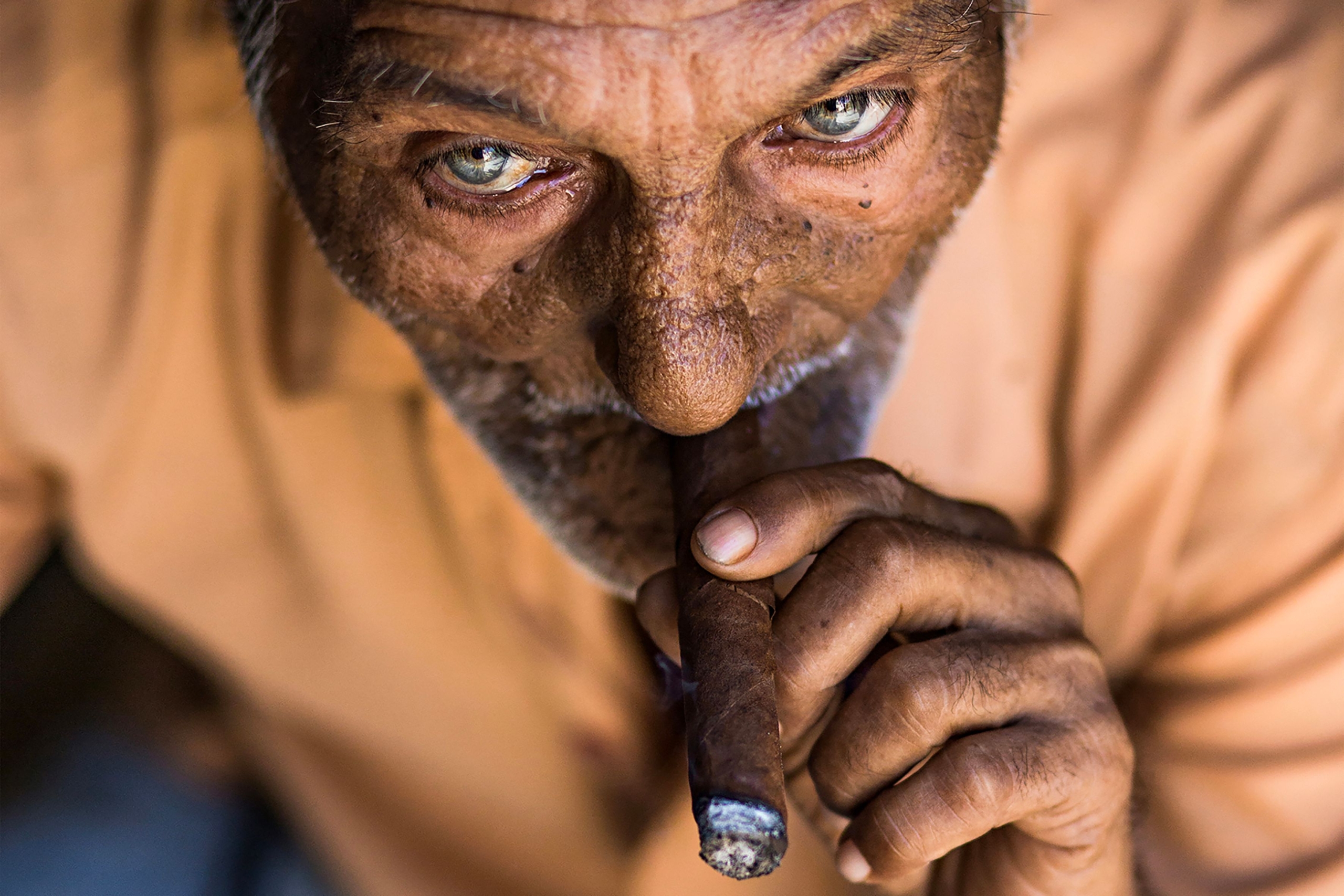 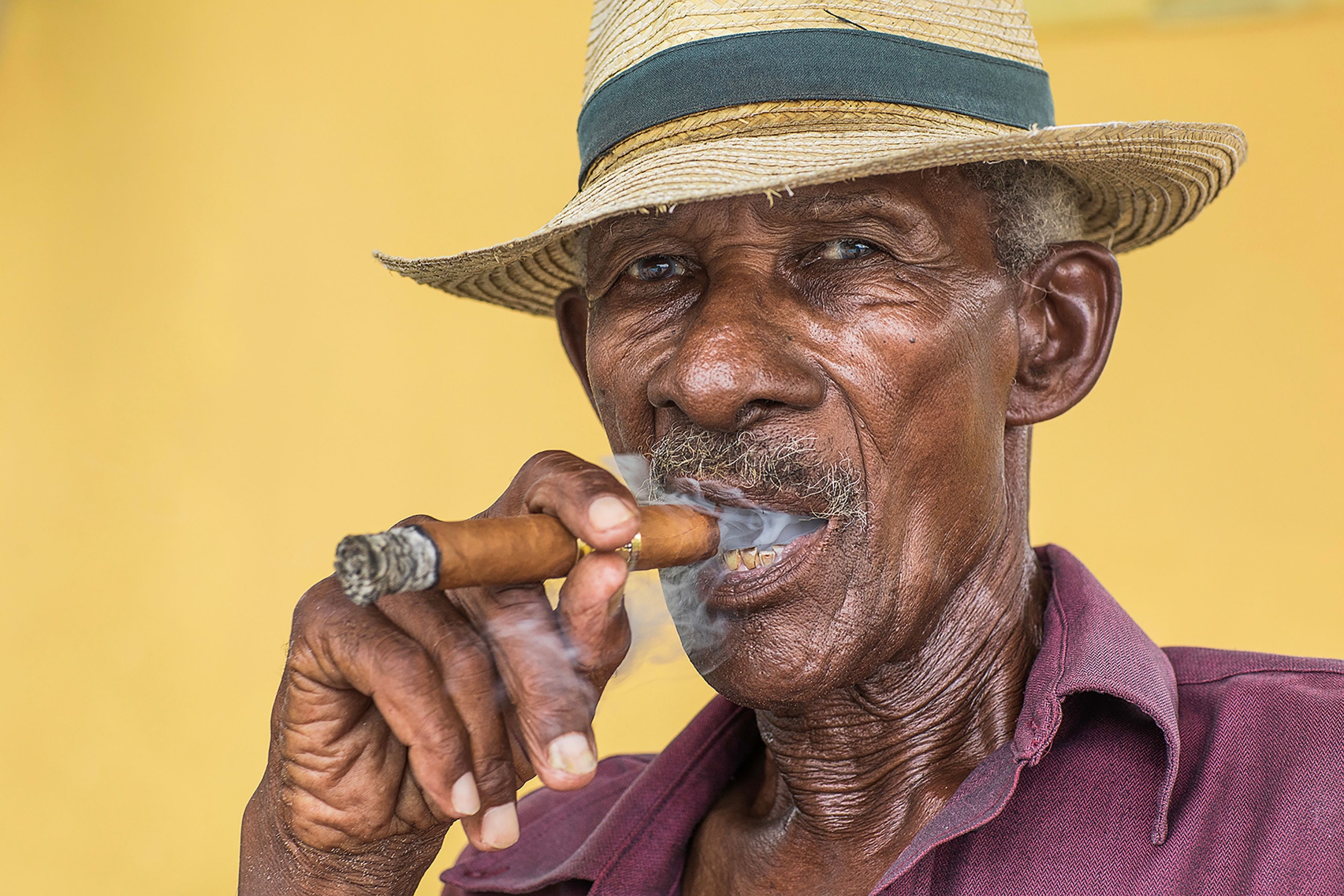 Now, Réhahn is an unofficial cigar ambassador. He brings cigars with him on his photographic journeys, sharing and smoking–creating a “moveable feast” of cigar culture everywhere he goes. He might see someone on the street whose interesting features beg to be photographed.

Instead of just snapping away, he shares an experience and a good cigar as a way to get to know the person. This is how he came to meet some of his most iconic subjects, such as “Elva” and “Daniel.” Something about them caught his eye, and he wanted to get to know them. After a cigar and a long conversation, a friendship was born. This interaction is part of what makes it difficult to turn away from his photos. The subjects seem to step out of their frames, ensconced in smoke and their own thoughts.
Larger than life.

Interaction is an important part of the artist’s creative philosophy. “You can have the most expensive camera in the world, but unless you have a connection with the people you’re shooting, there’s no point,” he says. Far from Cuba, in Vietnam—Réhahn’s adopted home—the photographer kne
els next to a woman in her 80s. She ignites the ball of tobacco in her bamboo pipe and inhales.
There’s an intimacy in the moment, a window into an artistic process, as the photographer shows his camera and the woman laughs. Instead of taking a photo, he lights a cigar and leans back against the wall, chatting and finding common ground despite differences in language and culture. With luck, it’s a connection that will last long after their tobacco burns down to the last embers and ash.