In many ways, Carlos “Carlito” Fuente and Daniel Marshall represent the upper echelon in the cigar world. They are each master craftsman with vision and meticulous standards.

The Daniel Marshall XXXVIII Limited Edition Anniversary Cigar is a once-in-a-lifetime smoke. It represents a celebration of Marshall’s 38th year in the cigar business as well as being his age when his daughter Julia was born. Carlos Fuente (in collaboration with Marshall) created the cigar with Dominican ultra-rare tobacco to honor his friend in a commemorative year.

A single roller was selected to work with this beauty at the Fuente factory in the Dominican Republic. There were only 12 cigars produced per day to ensure that everything would be perfect.

I carefully lit the Marshall XXXVIII and was met with some sizzle on the tongue–just a touch of spice. It’s a mild to medium cigar with vanilla and citrus notes, the XXXVIII is an absolute pleasure to smoke. It burns perfectly and you’ll certainly enjoy it until your fingers get hot. Vanilla is a high note and there’s an ongoing cinnamon-cream pleasure as well. This is a transcendent smoking experience from the refined handiwork of Mr. Fuente.

This cigar is a special occasion. The wrapper is beautiful, light and flawless. The veins are minimal and seams are invisible.

Something as unique as the Marshall 38th Anniversary cigar should be met with a luxuriant spirit. I had the good fortune to pair it with Laphroaig 30: The Ian Hunter Story. Ian was the last of the original Johnston family to run the Laphroaig distillery, about 100 years ago. The distillery is named for the area of land at the tip of Loch Laphroaig on the south coast of the island of Islay in Scotland. The whisky is presented in a beautiful book with Laphroaig’s printed history–a special collector’s piece in its own right.

Thirty years is a long time for aging Scotch whisky. It was essential to enjoy it as intended–neat and clean. Flavor-wise, there’s a minerality to The Ian Hunter story, along with wood and peat, but something much richer and deeper than those typical flavors. This is an example of something tasting “old,” but in a new and special way. Knowing the history between the cigar and whisky made it an even more rewarding pairing experience.

Though they never knew each other, I suspect Ian Hunter would enjoy an evening of whisky and cigars with Marshall and Fuente. These products really are “craft to the highest degree” between these men separated by oceans and time. The beauty of distilled, aged whiskies can similarly echo the beauty of a perfect cigar.

So, should you wait for years to enjoy a Daniel Marshall XXXVIII and Laphroaig 30? Absolutely not. You will savor this pairing moment for a lifetime. It’s the only way to fly. First-class all the way. 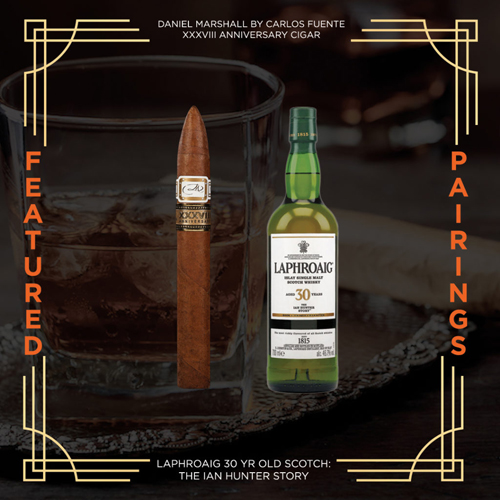