When you’re famous for a cigar named the “Dirty Rat,” it’s wise to capitalize on the Chinese Zodiac when 2020 rolls around as the Year of the Rat. It’s a common occurrence for limited edition smokes to celebrate zodiac signs, so it’s no surprise that the team at Drew Estate went hard on this one.

Offering a blend that’s slightly tweaked from the original Dirty Rat, this Year of the Rat is a shapely Grand Corona with….is that a pig tail on the cap? It’s something more like a flattened, inverted triangle shape. A beaver tail?

The Year of the Rat is sold in limited edition boxes of 10, and I found it to be perfectly compatible with Drew’s other Liga Privada line–a strong, slightly peppery cigar with the signature earthy blend of Honduran and Nicaraguan tobacco that Drew does so well. The ash burns tightly and perfectly straight. There’s a sweet, peanut profile as you reach the middle of the cigar. It fuses with the other tastes and remains balanced until the end.

I believe a limited cigar should be joined by an equally limited bourbon, so I poured a glass of Four Roses Small Batch Select 2020 Edition. This bourbon is bold and syrupy. It’s syrupy in texture, not in flavor as such. Flavors are dry orange and almond, with just a lingering bite of oak spice. The finish features that memorable Four Roses marker–lingering long with robust tastes. It’s a perfect combo to put a cap on 2020: two limited, flavorful treats that pair extraordinarily well together. 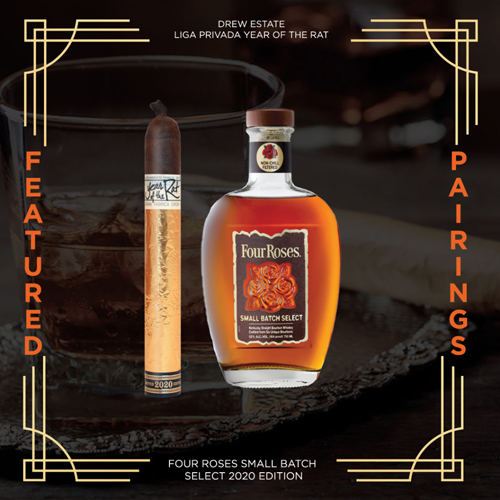